Will the real Passe Partout please sit down?

A passe partout is a poly synonymic term that has at times been applied to: a character in the Jules Verne novel ‘Around the World in 80 Days’, a layer of matte cardboard inserted into a picture frame and the title of a French TV children’s show. A ‘Passe-Partout’ was also used to define a particular type of Victorian crinoline hoop worn during the 1860’s that has also been described as the ‘The Carriage Collapsible Caged Crinoline’. Let’s stick with the French term, it’s less wordy.

‘Passe Partout’ literally translates as ‘pass through anything’ and that was the purpose of this device; it allowed the wearer to gently squeeze their skirt with their arms, therefore collapsing the crinoline, which allowed them to safely step into a carriage, pass through a narrow doorway or just sit down comfortably without risking a broken neck. 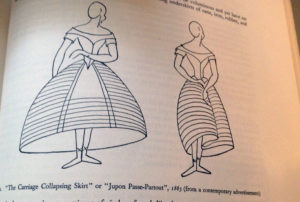 At the beginning of the 19cc, women’s fashion had experienced a token liberation through the ‘Empire’ silhouettes that were made popular as a result of the French Revolution of the previous century. In an effort to purge all social and cultural affectations of the’ ‘Ancienne Regime’ that had been recently decapitated by this political upheaval. The new sensibility was to return to the ‘purist’ style of the Greeks and so ladies dresses began to resemble the diaphanous draped styles of the Greek and Roman statues discovered by Napoleon as he pillaged and plundered his way around Europe and the Middle East. 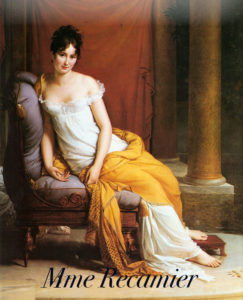 Unfortunately this ‘natural style was to be short-lived and eventually, as the 19cc progressed, skirts once again began to get ridiculously wider and wider. So much in fact that they posed a risk not only to the wearer but to the public at large. There were several well documented cases of ladies suffering a loss of their lives as a result of them tripping over their hoop skirts in an attempt to board a coach or use the stairs. Ironically, these extra wide hoop skirts were referred to as ‘cage crinolines’ and they definitely lived up to their namesake because they really did confine the movements of the wearer to the point that one careless move could kill them! 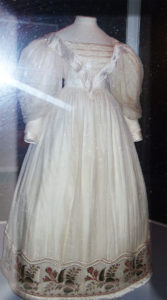 Sometime around the mid 1860’s some enterprising individual created a hoop which was rigged in such a way that enabled the wearer to ‘squeeze’ their shirt thereby allowing an ease of movement without endangering their lives. And thus, the ‘Jupon Passe Partout’ came into being. 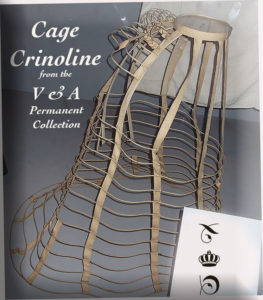 This concept of the ‘rigged’ undergarment continued to experience popularity throughout the 19cc even as the silhouettes morphed into the ‘bustle’ and ‘tournure’ silhouettes of the late 19 and early 20th century Edwardian fashions. 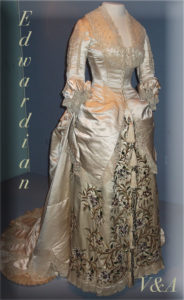 Thankfully these confining symbols of female oppression began to wane and female silhouettes began to be liberated. Due in part to the Woman’s Suffrage Movement and World War 1 that included more women into the workplace, one began to see the development of the simple casual styles of the ‘Gibson Girl’ and eventually the complete liberation of the Flappers in the 1920’s. 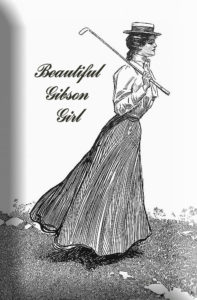 One interesting trivia about this era was Coco Chanel, whose suits also liberated women from the confinement of the corset, was also, at the beginning of her career, adopted the styles of a ‘Gibson Girl’.