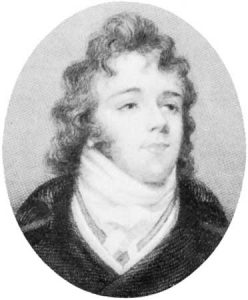 This month’s Muse is none other than Beau Brummell, the Father of the modern trouser and an arbiter of fashion who became so influential that people would actually pay him money to watch him get dressed in the mornings. Now how’s that for a life hack? George Bryan “Beau” Brummell was born in London, UK June 7, 1778 and died March 30, 1840 in Caen, France. A man of humble origins who was such an adept social climber that he became best friends with the Prince of Wales, was the top fashion influencer of his time and whose vertiginous fall from grace landed him in an insane asylum where he perished from advanced-stage syphilis. But it’s what happened in the 62 year arc of his life that makes him such a fascinating character, who set fashion trends which are still followed and respected today.

Beau Brummell was the son of a shopkeeper who was determined to push his son into the upper echelons of society and he inculcated that social climbing drive into young Beau. His father was able to get his son into Eton and thanks to Beau’s wit and flare for dressing, his popularity with the sons of the aristocracy eventually led to a long lasting friendship with the Prince of Wales. After Eton, Beau served in the Military and once discharged in 1797, he came into a small inheritance from his father, which allowed him to set himself up in London. Taking an apartment in London’s posh Mayfair District, he entertained his fancy friends and created new trends for the fashionable set to follow. Naturally, given Beau’s flair for hyperbole and his talent for living beyond his means, his extravagant lifestyle eventually got him into trouble. We’ll get into that later in the post.

Although history remembers Beau as an iconic Dandy of the Regency Period, he was much more than that: he not only changed how we dressed but also how we lived. He popularized daily bathing and refused to wear excessive colognes. The fashion of the times was still under the influence of the 18cc “Fops”: powdered wigs, rouge, fancy coats, breeches and stockings. Personal hygiene practically was non-existent; heavy perfumes and creams were used in the place soap and water. Bathing was reserved for special occasions. Beau changed all that!

Beau’s take on clothing was that it should be functional, fit well and be an investment. In collaboration with the numerous tailors he commissioned, he set about creating the Bespoke  suit, which was accomplished through a series of fittings and elaborate under stitching. Up until then, if one desired to have an outfit made, one visited a “Draper”. The “Draper” would create the article of clothing by  “draping” the fabric upon the wearer’s body.  Fabric that could also double as upholstery, they didn’t differentiate between the two. There was no ease of movement. Lack of movement was considered a status symbol because it meant that you were rich enough to afford servants, who could do things for you. But Beau changed all of that. He believed that clothing should be comfortable but elegant. He also preferred plain colors, starting with a dark jacket and tan pants and eventually creating a suit and trousers made from matching fabrics. “To be truly elegant one should not be noticed” was his favorite line. He was a Dandy and a Rebel.

There already existed a bit of a fashion rebellion in France, where as a result of the French Revolution younger people were rejecting the elaborate fashions of the Old Guard by creating a parody of it. These people were called “Les Incroyables” and they wore exaggerated jackets and cravats, shaved their heads into something resembling a mohawk. This hairstyle was known as “Cheveaux à la Victime”, just like the condemned who were prepped for the blade of the guillotine. Dressed like this, the gangs of “Les Incroyables” would roam the streets of Paris looking for a fight. Understandably many people found this edgy style distasteful. But Beau managed to borrow from them and make the conceits tasteful and flattering. If you look closely at an image of an Incroyables it’s obvious that he was influenced by this earlier trend.

Beau’s flamboyant but understated style caused such a sensation that people would actually pay him money so that they could observe him and his valet enact the morning “toilette”. He would begin by bathing with warm water and soap. Unheard of at the time! Then he would proceed with his dressing ritual. Much like the “Grand Levées” of the former Kings of France, every article of clothing he chose was closely observed by his adoring public. The way he twisted his cravat or his choice of shirts created a pandemonium. His fashion prononciamentos were such that he was elevated to the position of “Sartorial Advisor” to the Prince of Wales.

But of course, the fickle finger of fate was about to give our hero a hard poke in the eye. Beau Brummell, having only a modest fortune, spent more than he earned. In addition to the love of clothes, he also had another vice: Gambling. Slowly but surely his inheritance began to slip through his fingers. At first his friends were happy to float him loans to cover his gambling debts. But after awhile, he had worn out his welcome. The aristocracy who once considered his cutting wit and personal style to be amusing, now considered him to be crass and vulgar. “Not knowing your place” in a world where your position in life meant everything is the ultimate Mortal Sin.

Life began to get increasingly precarious for Beau, always one step ahead of being thrown into debtors prison (yes, they had those then) He actually had to employ one of his Tailors as a combination bodyguard, hit man and bill collector! Who knew tailors could be such badasses?

The ultimate faux pas he committed and one that eventually sealed his fate forever, occurred in 1813 at a costume ball in London. Among the invitees was the Prince of Wales. By now the future George IV had tired of Brummell’s over familiarity. As the expression goes “Familiarity Breeds Contempt” and as the Prince made his way down the receiving line, he purposely cut Beau by refusing to greet him. The extent of the social humiliation was palpable to the entire room. But Beau, not one to be one upped by anyone, not even the Prince of Wales, turned to his friend and remarked: “Alvanly, who’s your fat friend?” I would have given anything to travel back in time and be a fly on the wall. I’m sure you could have heard a pin drop.

After that things began to unravel at hyper speed. The Prince, who had always been sensitive about his weight, promptly had Beau bounced out of the party. No more “Sartorial Advising” there! A society that hung on to his every word and followed his every trend with almost religious fervor now shunned him like a leper. His gambling debts and debts to his tailors, cobblers, grocers, landlords landed on him like a ton of bricks. Back then one could be thrown in jail for not paying their bill, there was no such thing as bankruptcy. After 3 years of floundering about as a social pariah, Beau Brummel had no choice but to collect his few worldly possessions and escape to France.

Beau Brummell was to live his final years in the French city of Caen. Some of his more sympathetic friends secured a position for him at the British Consulate where he stayed for 2 years. But life would not he kind to Beau, after his diplomatic assignment ended he drifted about France, unable to return to England due to his debts. But the French laws regarding insolvency were even worse than Great Britain’s. The long arm of the Gallic Law caught up with him and he ultimately wound up in a French Debtors Prison.  What the English could not accomplish, the French did with the cruelest of ease. Thanks to a few supporters he had left, they were able to bail him out and pay off his debt.

By now it was 1835 and from all accounts poor Beau was merely a shadow of his former self. He had completely let himself go and no longer cared about his appearance. He was barely recognizable to the few friends who had remained loyal to him. To complicate matters even more, he began to suffer from seizures and psychotic episodes. It was apparent that he was suffering from advanced stages of syphilis, which left untreated, can diminish a persons mental capacities. He died penniless and forgotten in a charity hospital in 1840 and is buried in the Protestant Cemetery in Caen, France.

Beau Brummell, liberated men from the restricting, affected clothes of the previous century. He created a men’s style that was comfortable but at the same time practical and elegant. The perfect attire for the Industrial Revolution to come. Decades later in the early 20th century, Coco Chanel would do the same for women and there is no doubt in my mind that she was influenced by Beau Brummell.

There have been many films made about our Sartorial Hero, but my favorite one is “Beau Brummell, This Charming Man”, a BBC TV movie released in 2006. James Purefoy nails it with his performance as our subject and Hugh Bonneville plays a good foil as the the Prince Regent. There is a link below and I highly recommend this film, it’s a lot of fun to watch.

There is also the statue to Beau Brummell in London’s Oh-So-Exclusive Jermyn St.. Beau’s former stomping ground is just as fashionable today as it was back in the 1800’s when Beau would strut his stuff down the street with a Dandy’s swagger. There is a PMA color called “Brummel Brown”, a watch by Le Coultre, a pop band. Even in literature where he appears as himself in one of Sir Arthur Conan Doyle’s Sherlock Holmes Novels.

This stylish Rake, lives eternally as a Male Muse, inspiring all genders to think outside the box and to create trends, not to follow them.

No portion of this article may be reproduced without the owner’s permission.

Custom Made Fantasies from the Historical to the Hysterical©