‘Who wants to go to hell with Madam Satan? Was the catch word for this peculiar cult classic of pre-code Hollywood. Up until the early 1930’s Hollywood movies where pretty racy in their depictions of sex and violence. Cecil B De Mille’s film musical ’Madam Satan’ was one of those and it does not disappoint. Now DeMille is usually remembered for his religious and historical epics such as ‘The Ten Commandments’, ‘Cleopatra’ and ‘The Greatest Show on Earth’. So for him to direct a racy, quirky, musical was a bit out of character for him. But remember that a talking pictures were all the rage at that time and like many of his colleagues he jumped on the ‘bandwagon’ because it was the lucrative thing to do. I suppose for the same reason that The Rolling Stones and Kiss recorded Disco songs in the 70’s .

But lucky for De Mille he had a ‘Dream Team’ of creative talent as collaborators both in front and behind the camera: Jeannie MacPherson screenwriter, Cedric Gibbons Art Director, Theodore Kosloff featured dancer and of course, costumes by the legendary Adrian (inventor of the shoulder pads). Just to name a few. These names may not mean much today but believe me back then, they did some heavy lifting.

So the premise of this movie is about a husband and wife whose marriage is on the rocks. He winds up leaving her for another woman but she connives to win him back by co-hosting a costume party on a zeppelin over Central Park which of course becomes and over-the- top musical number showcasing the dancing talents of Kosloff and of course Adrian’s uniquely original designs. As zeppelins are wont to do, it malfunctions and all the guests must bail out in parachutes to save their lives. But not before the audience is exposed to lots of upshots of scantily clad women flailing the legs and flashing their panties as they descend back to earth. Oh, the humanity!

This near death experience makes the husband realize what a jerk he had been to his wife and so he goes running back to her loving arms. All is forgiven.

In spite of the superficial sounding plot, the story does have a dose of realism not found in post code Hollywood. For starters , the couple sleeps in the same bed, something that was not allowed post Breen Code. There’s infidelity, lots of sexual innuendo, a gay sub-plot with some of the characters and then of course there are this lovely, sexy costumes by Adrian. Sometimes I wish that Adrain had made more technicolor movies. The two that come to mind are ‘Wizard of Oz’ and ’The Women’. And even those where partially in color, the culprit being ‘Gone With The Wind’ whose production had swallowed up all the technicolor film in Lotus Land.

In my opinion, the back & white film doesn’t do Adrian’s costumes justice. I finally had the chance to see Adrian’s designs for Madame Satan at an A.M.P.A.S retrospective highlighting former Oscar winners/nominees for best achievement in Costume Design. There in its own showcase was the black velvet ‘Madam Satan’ costume with the embellished cape. WOW! The colors were so vivid and the detailed workmanship was absolutely exquisite.

Another bone that I have to pick with ‘Madam Satan’ is that the choreography is at times a bit sloppy. I wonder of this is due to De Mille’s lack of understanding of the genre. One wishes for the military precision of a Busby Berkley number that would have pirouetted in lockstep with Adrians costumes and Kosloff’s athletic physique. But alas, Busby was under contract with a different studio so it was not meant to be.

Adrian’s creations for ‘Madam Satan’ have proved to be extremely influential over the years. Spawning a multitude of costumes inspired by his original designs. The most recent being Eiko Ishioka’s designs for the ill fated Broadway musical version of ’Spider Man’. Imitation still is the best form of flattery.

Please enjoy these pictures and if the reader gets a chance to see ‘Madam Satan’, please do. It’s campy and a bit dated but still worth watching. I truly wish that Adrian’s costumes for the film would go on tour again. They are beautiful and have withstood the test of time tangibly and intangibly. 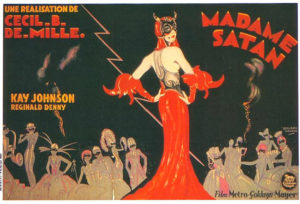